AN ITV Tonight report earlier this year suggested that by 2030 a third of British jobs will be automated. At the recent PPMA show, Pacepacker MD Dennis Allison further corroborated that the UK’s interest in robotics is on the climb, reporting that his company has experienced a 40% rise in robotic enquiries from the food sector in the last 12 months alone.

During the ITV report, experts implied that we can expect change on a scale akin to the Industrial Revolution in the 19th century, suggesting that the process of integrating robotics into the workplace has already begun and the next 10 to 20 years will see a major acceleration. “According to BARA the food sector has seen a 60% increase in automation adoption since 2000.” Dennis explained: “At Pacepacker we have witnessed a huge surge in the interest of robotics in the last 12 months. In fact, last year 35% of all enquiries we received required a robotic solution – in 2014 this figure has grown to 75%.”
Strategic partner and system integrator for FANUC UK, Pacepacker Services designs and manufactures packing machinery for the food, aggregates and bulk industry. Together with FANUC, Pacepacker stresses that while automation is the future and robotics will play a major role in making production facilities more efficient, manufacturers need to ensure that new technology creates replacement jobs and that their workforce has the skills to take advantage of it.
Dennis continues: “I think people are waking up to the fact that the food industry is well automated in terms of manufacturing processes, but when it comes to packaging which is very labour intensive, the UK’s not very advanced. For example, palletising in the UK is probably around 60% automated. In comparison to automation of packaging, which is around 10%.
“However, manufacturers are now realising that they can take labour out of their costs and redeploy it elsewhere if they automate. People whose positions become redundant due to automation are invariably given roles elsewhere within the business. In our view, automation safeguards the roles of the majority, making the business more efficient and enabling it to maintain and hopefully expand its contracts by improved quality and production throughput.”
At PPMA, Dennis was also quick to point out that robots can also be reprogrammed to fulfil a variety of physical tasks and activities jobs, in comparison to dedicated machinery that cannot. For instance, Cartesian systems will be manufactured to suit a certain application. A robot on the other hand will come with a standard envelope of movement that allows it to be more flexible in future alterations and re-deployment.
Dennis continues: “Businesses that evolve will keep ahead of the game. In many cases, automation opens up new opportunities for the business and individuals within it.
For example, the technicians who worked on the production line can now be re-deployed to operate multiple lines of automated equipment and to other areas of the business (both up and down stream) to oversee and ensure automated throughput is maintained.
With fast return on investment and the long-term savings that can be made through automation, other benefits include improved quality, reduced wastage, greater production levels, less sickness and potentially an increased capacity to expand into other areas,” he said. 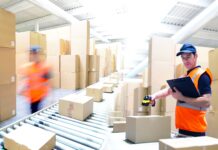 Packaging sector steps up in time of need