A palletising adhesive on show at Interpack appeared to offer a 50% cost saving over shrink film, stretch film and hoop banding approaches to palletising loads, while also offering a number of environmental benefits.

Available as a palletising safety system from German firm H Rand GmbH, the heart of the approach is an adhesive called Grip Fix. The adhesive is applied in small quantities to the pallet loads before they are palletised. After a short drying time, the pallet is stable and remains so until the pallet loads are unloaded again. The trick to the whole thing, said the company’s Klaus Wetzler, is that high shearing forces are achieved, but with only low peeling forces. This means the pallet loads don’t slip but can be separated again easily. The adhesive apparently leaves no residue when depalletising.
A central problem the system is aimed at helping avoid is the tendency for pallet loads to slip, especially in transit. Pallets secured with Grip Fix will remain stable, says H Rand, not only during the palletisation process, but also en route to the automatic stretch film unit, during transportation, during order picking and in the distribution centre. No longer will you have to re-stack slipped pallet stacks, insists the company.
And pallets secured in this way will apparently not slip even if the contents of the packages are not stable – for example, when transporting granulate-filled polythene bags or bottles in cartons. Transporting goods secured in this way thus saves the costs of complaints or having to take back goods.
The adoption of its Grip Fix system could also help check increases in the quantity of transportation and secondary packaging, something that has tended to creep up in recent years even as sales packaging diminishes in quantity. And this would also eliminate the cost and time needed to sort this kind of packaging before recycling.
Waste savings appear to be one of the major benefits of the Grip Fix adhesive system. The adhesive itself also leaves no residue and is biodegradable. Overall, the waste saving compared to approaches like shrink film and stretch film appears to be considerable.
Wetzler suggests the precise formulation of adhesive is optimised to the load being stabilised, and H Rand has over 122 types of adhesive. “We say to the customer: ‘send us some empty bags and we’ll test them’”.
Grip Fix adhesive also comes in various sizes of container, from a 1 kg hand-held bottle through to 1,000kg containers. And the pallet loads used with the system may be polythene bags, paper bags, cartons, cellophane items, fabric bags or small packages.
Use of the Grip Fix adhesive is also made easier by the use of a quick-closure system. Regardless of whether the adhesive is supplied in a canister or in a drum, the container can be connected very easily to the system with the quick-release closure, says the company. The quick-release closure also produces a closed system, in that no dirt can enter the inside of the container, so the adhesive remains germ-free and residue in the container is unable to dry out. See www.palettensicherung.com for more details.

New system helps get to grips with pallet issues 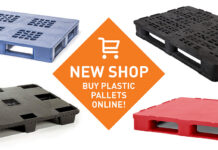 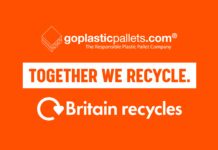