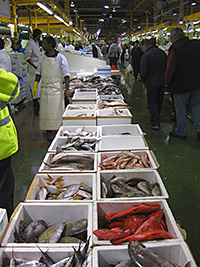 The British Plastics Federation EPS Group has decided to expose the secret life of the polystyrene fish box and its role in protecting the 657,000 tonnes of fish landed at UK ports and fish farms every year.

“It’s a product that is hardly ever thought about but it’s the perfect packaging because it offers thermal protection as well as impact resistance, light weight and low resource usage. It’s 98% air, stackable, easily sealed and can readily be given a second life at the end of its conventional use” said Emes. For these reasons, the BPF EPS Group set out to capture in just five minutes a twenty-four hour period in the life of just a few of the 22 million fish boxes which every year keep UK fish and seafood free from damage and safe from soaring temperatures. Following the boxes from factory to fish farm and from port to plate – and on to recycling – film crews worked in the night hours in places as far apart as Loch Linnhe near Fort William and Brixham Harbour in South Devon. They recorded the landing of the day’s catch, the journey through the processing house and the onward transit to the UK’s major fish markets – they even popped into a top fish restaurant to catch the arrival of the fish box in the professional kitchen. The film includes scenes shot at dawn at London’s Billingsgate where the ubiquitous fish box is acknowledged by merchants as a critical factor in keeping seafood fresh and safe and thereby reducing food wastage. Billingsgate also leads the way in ensuring that all the fish boxes left over at the end of the day are compacted for recycling.