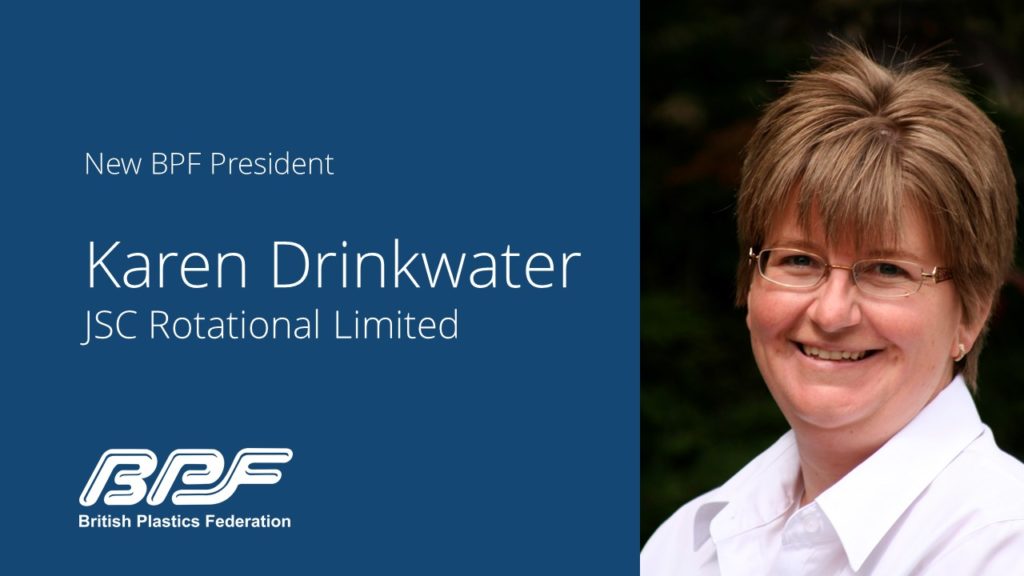 KAREN Drinkwater has been elected as the new president of the British Plastics Federation (BPF).

A founding director of JSC Rotational Limited, she succeeds Martin Althorpe, technical director at Epwin Fenestration Division, who has held the role since 2019.

Karen established JSC Rotational with her husband in 2004 and the company joined the BPF in 2006. Between 2011 and 2015, she was chairperson of the BPF’s Rotational Moulders Group. During this time, she emphasised the need for the rotational moulding industry to engage with young designers. She provided key advice when the BPF ran the highly successful international ARMO conference in Nottingham in 2015, which showcased the latest rotational moulding designs and saw the winners of the BPF-run ARMO student design competition announced. Since then Karen has played an active role within the BPF’s council, having been elected vice-president last year. Karen is now the first female president of the BPF.

Commenting on her appointment, Karen Drinkwater, said, “When my husband and I founded our company, I was welcomed into the rotational moulding community, where everyone was really supportive whilst I built up my knowledge. I am naturally curious and love being part of the manufacturing community here in the UK.

“Years later, it is an honour to be elected as president of the BPF. I hope my broad experience as a director of an SME can help keep the industry suitably focused during a time of unprecedented challenges. The plastics industry needs to keep highlighting how essential it is to society, how it is vital to so many industries, and how it plays a positive role in reducing carbon emissions as the UK strives to meet government-set emissions targets by 2035.”

BPF director general Philip Law, added, “Karen has been a fund of valuable insights that have helped steer the BPF over the years. I congratulate her on being elected as president – it is extremely well deserved. I look forward to working with her closely over the next year as we navigate a range of challenges the industry must rise to. My sincere thanks also go to our Immediate Past President Martin Althorpe for his splendid presidency during arguably the most difficult circumstances in the BPF’s history.”