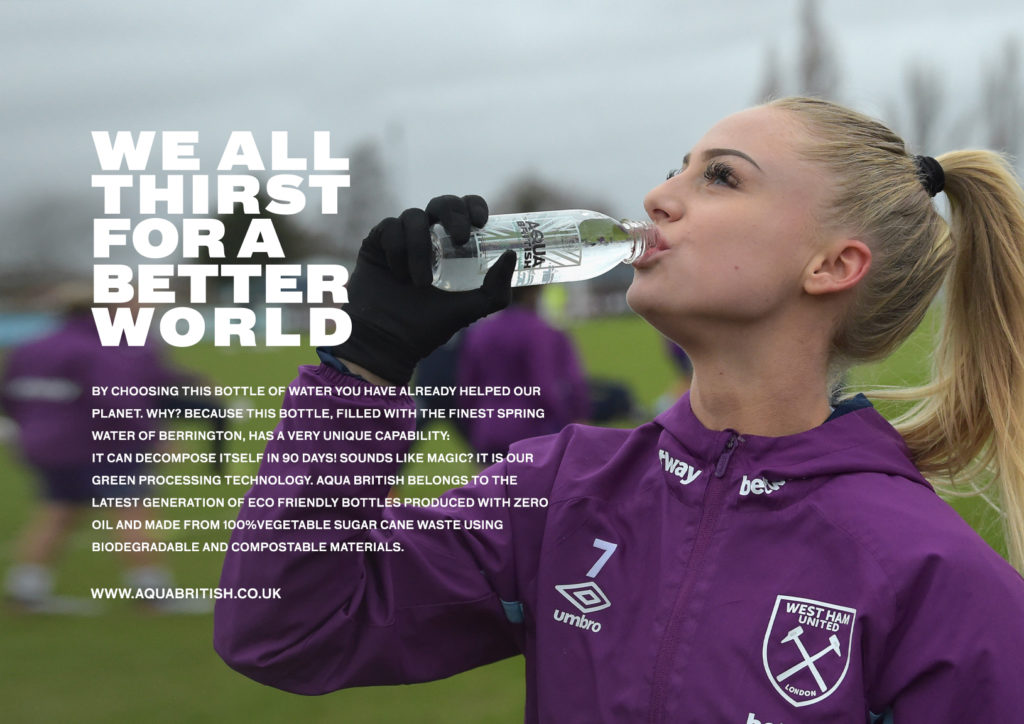 A bottled water brand billed as being a ‘game-changer’ has struck a sponsorship deal with West Ham United’s women’s team, as it approaches its launch date.

Aqua British will hit stores in January, allowing for consumers to purchase an entirely biodegradable water bottle – from the cap to the label.

The partnership comes after the English Premiership club announced its commitment to sustainability by offering reusable beer cups at their London Stadium during men’s games, saving what they estimate to be around 20,000 single-use plastic cups from landfill at each match.

West Ham United’s women’s managing director Jack Sullivan said, “It is great to see another partner come on board and join the West Ham women’s journey.

“This partnership with Aqua British appealed as we see ourselves as at the forefront of women’s football and development, and Aqua British is a product that will make a real change to the environment and water industry going forward.

“I am delighted to welcome them to the Club and hope this is the start of a long-lasting relationship for both parties.”

Aqua British CEO Harshit Mishra added, “It is a pleasure to sign this partnership with West Ham United women’s team. They, like us, are looking to lead the way in their industry with innovative ideas and we hope we can help the side reduce their plastic waste with our 100 per cent biodegradable bottles.

“West Ham United women’s team have shown us that they care deeply and passionately about the environment and I am confident that, together, we can continue to raise awareness of the battle against plastic waste.”

The parent company of Aqua British, BVG Distributors Limited, has promised to spend four pence from the price of every sold bottle on planting trees and financing biowaste bins across the UK.