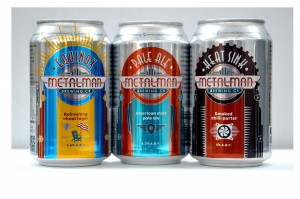 Irish craft brewer, Metalman, has joined forces with leading can maker, Rexam, for their first foray into the production of canned beers.

The 330ml cans, produced for Metalman’s Pale Ale, Equinox and Heat Sink beers, feature a series of striking designs with a heavy Art Deco influence and were designed in-house by Rexam’s creative team at their Graphics and Design Centre.

Gráinne Walsh, Managing Director for Metalman, speaking on how they got involved with Rexam, said, “We first met the Rexam team at Drinktec back in 2013 and were impressed with their approach to design and innovation.

“They visited our brewery shortly after and their proactive approach has continued. The support we received at every step of the design and manufacturing process was invaluable. It was amazing to see how the team were able to translate our concept into a stand out can design that brings to life the heart and soul of our brand.”

Rogier Keukens, UK Sales Manager for Rexam, added, “There has been huge growth in the craft beer category and we see this continuing. A large number of craft breweries are selecting the beverage can over other packaging formats.

“We are delighted to be working with Metalman, the first Irish craft brewer to can its beer. As a can supplier, it is rewarding to play a part in the growth that Metalman is experiencing and we look forward to continuing this journey together.”