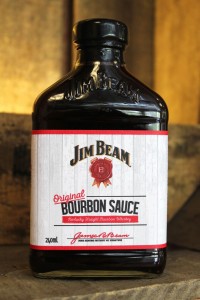 Glass packaging manufacturer Beatson Clark has captured the flavour of the American south in the new bespoke bottle it has designed for JIM BEAM® Original Bourbon Sauce.

The bottle, which features the embossed words Jim Beam on the shoulders, has been designed to echo the shape of the replica 1940s American Stillhouse at the JIM BEAM® distillery in Kentucky.

JIM BEAM® Original Bourbon Sauce is a rich, smoky and sweet sauce made using Kentucky Straight Bourbon Whiskey. The Jim Beam sauce is the first in a range of on-trend sauce flavours that is being launched this year by Manchester-based The Flava People.

“Using real JIM BEAM® Kentucky Straight Bourbon Whiskey at 9%, this one packs a real Bourbon punch,” said Danielle Complin from The Flava People. “It’s the perfect premium sauce for the new Americana trend that’s been sweeping our nation and isn’t showing any signs of going anywhere soon! Unlike other brands, this one is a real Bourbon sauce rather than just another barbecue sauce.​

“With its angled shoulders the glass bottle has been modelled on the JIM BEAM® Still House and it also echoes the classic shape of the hip flask. It really stands out from the array of round or rectangular bottles that you currently see on the shelf.”

Charlotte Taylor, Marketing Manager at Beatson Clark, says the bottle was just the kind of challenge the company relishes.“Our customer was looking for a unique, signature bottle which would stand out on the shelf and have a weighty, premium look and feel while at the same time communicating the well known Jim Beam brand,” she explained.

“Our in-house design team worked closely with The Flava People and we’re pleased to say they’re really happy with the end result, which stands out partly because it looks more like a spirit bottle than a sauce bottle. Embossing is a really popular option at the moment, allowing brands to really make a statement with a unique bottle design, and our new design software means that we can sculpt the embossing, making it more defined as well as easier to manufacture.”