Following a recent surge in enquiries from food packers for versatile palletisers, FANUC UK is working with automation specialists Festo and Pacepacker to develop systems which can handle bags, boxes, crates, trays and slip sheets by means of a single robot arm.

Food manufacturers face a number of challenges in their production operations. In a manual process, they must deal with ergonomic issues, labour availability and the uncertainty of increasing costs associated with legislation. In an automated process, accommodating rapid-fire product & pack changes driven by sustainability initiatives and shelf impact, as well understanding and improving key performance measures such as Overall Equipment Effectiveness (OEE), are key. Although the cost of a robot has reduced (for example the cost of FANUC’s latest palletiser the M410iC/185 is 7% lower compared to its predecessor, yet has a 12% increase in payload capacity), this is just one of many factors that have improved a robot’s viability in the food industry.

“We’ve strengthened the business case for robot adoption by providing the necessary functionality that a food producer needs,” said John. FANUC’s latest robots have been designed specifically to work in the harshest of environments, and in addition to being smaller, stronger and faster, they incorporate the latest vision technology to improve the robot’s ‘sight’.

For the ultimate in handling versatility, FANUC’s system integrator Pacepacker is using the latest Festo technology to design bespoke end effectors – the robot hand. Combining gripper fingers and different sets of vacuum suction cups, the end-effector seamlessly auto-adjusts as a product travels down the conveyor to the robot. “A single robot arm will prepare pallets and slip sheets, before handling a variety of pack types including sacks, crates, boxes and trays.”

Created using modules rather than components, the new style end-effectors are simple in their design with less to maintain by the customer. “When working on a complex project, there is a danger that a system is over-engineered with the knock on effect that the solution created becomes larger, heavier and more expensive than necessary. To combat this, standard ‘off the shelf’ modules are used to create the end effector, rather than a series of components which has a tendency to lead to unnecessary complexity and a cumbersome design,” said John.

“In production scenarios where humans and robots are occupying the same space, the latest simulation tools now satisfies stakeholder concerns over worker safety,” commented John. FANUC’s ROBOGUIDE enables customers and integrators alike to precisely visualise and pre-programme a robotic installation in a safe and convenient virtual 3D world, before putting those plans into effect. As well as being able to predict and forestall potential new-build issues, ROBOGUIDE gives users a useful tool to scope-out changing requirements and better plan for project upgrades. It can pre-empt – and help prevent – costly damage to the robot and help keep co-workers safe.

For customers with space constraints, FANUC’s DCS (Dual Check Safety) software helps the robot successfully navigate obstructions in a factory infrastructure. “FANUC’s new DCS software limits the way the robot moves in a 3D world, which has never been possible before. It means that we can teach the robot to avoid obstructions, and still use a large robot with a long reach,” enthused John. “Furthermore, the software is able to provide pl-e protection in situations where the robot has to operate in close proximity to safety fencing.”

For space and budget conscious users, FANUC’s PMC (Programmable Machine Controller) enables control of the complete cell. Using the PMC, the infeed and pallet conveyors for example, are controlled by the robot without the need for an additional PLC and with no impact on motion performance.

Along with energy reducing technology built into all FANUC products to reduce power usage with savings in the region of 20%+, FANUC guarantee 25 year parts availability (including obsolescence avoidance solutions) to cover the life span of its robot palletiser systems. 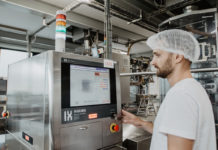 New systems bring more than a grain of positivity