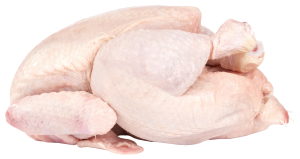 FEARS that bacteria found on the outside of chicken packaging could cause food poisoning have been raised, following a rigorous investigation by the Food Standards Agency (FSA).

The FSA has published the cumulative results from the first two quarters of its year-long survey of campylobacter on fresh chickens.

Tackling campylobacter is the FSA’s number one food safety priority and it is spearheading a campaign to bring together the whole food chain to tackle the problem.

Individual results by major retailer have also been published.

The results to date show:

In total, 1,995 samples of fresh whole chilled chickens have now been tested, with packaging also tested for most of these samples. Data show variations between retailers but none are meeting the end-of-production target for reducing campylobacter.

This 12-month survey, running from February 2014 to February 2015, will test 4,000 samples of whole chickens bought from UK retail outlets and smaller independent stores and butchers.

Campylobacter is killed by thorough cooking; however it is the most common form of food poisoning in the UK, affecting an estimated 280,000 people a year. Poultry is the source of the majority of these cases.

Steve Wearne, FSA Director of Policy, said, ‘These results show that the food industry, especially retailers, need to do more to reduce the amount of campylobacter on fresh chickens. Although we are only halfway through the survey, 18% of birds tested had campylobacter over 1,000 cfu/g, the highest level of contamination, and more than 70% of birds had some campylobacter on them. This shows there is a long way to go before consumers are protected from this bug.

‘If chicken is cooked thoroughly and preparation guidelines are properly followed, the risk to the public is extremely low.

‘There are signs that some retailers are starting to step up to their responsibilities. When more do, we will see the sustained improvements that will help prevent many of their customers getting ill.”