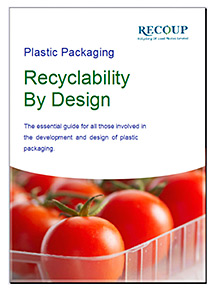 RECOUP’S guideline document for packaging technologists and pack developers involved in plastic packaging has been revised for the second time this year.

‘Recyclability By Design’ is one of RECOUP’s most important documents, well regarded throughout Europe, and even translated into Spanish. The existing version, released in June this year, was a refresh of the look and update of some of the content, including some additional chapters and more relevant photographs. However the technical details, the recyclability matrices for each polymer, were not re-written. Recoup says it would not publish any review of these without major research, input and approval from both the recycling industry and the packaging industry.
Recoup packaging technologist, Paul East, declared “The polymer recyclability tables are the most important and relevant part of the document, which is why we have spent some time talking to the most relevant people to ensure the information is current, informative and accurate.”