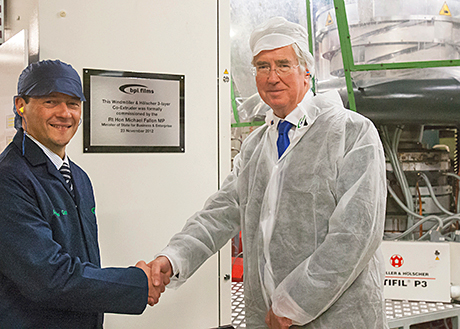 THE boss of one of Scotland’s biggest food packaging suppliers has branded the UK government’s new plastic recycling targets “unachievable”.
Andrew Green, managing director of Greenock-based British Polythene Industries (BPI), is convinced DEFRA’s increased targets, which came into effect in January, will increase costs, damage existing recovery infrastructure and encourage fraudulent trading.
While he emphasized his support for the ethos behind the ambitious strategy, he argued the consequences would have an impact across all food packaging sectors.
“We have absolutely no issue with stretching recycling targets,” he said. “Indeed as the largest recycler of polythene film waste in Europe, we actively support stretching recycling targets. Our concern with the (new) targets as now set by DEFRA is that they are unachievable.”
Green expressed his concerns at a formal ceremony to unveil a £2m co-extrusion line at the company’s BPI Films facility in Sevenoaks, Kent, which was attended by the Minister for Business & Enterprise, Michael Fallon MP and more than 50 guests.
The regulations set new recovery and recycling targets for packaging waste for the period 2013 to 2017.
Current levels of recycling of paper, wood and glass packaging over the five-year period remain unchanged but the amended regulations set a more stringent trajectory for recycling of aluminium, steel and plastic.
It’s this increase that prompted Green to warn all players in the food sector, including retailers, packers and producers, of the “huge and disproportionate” costs that could hit businesses handling plastic packaging over the next few years.
He added: “Having increased the amount of plastic waste we recycle as a nation by 500,000 tonnes in the last 13 years, these new targets require our industry to increase the volumes of plastic waste we collect and recycle by 600,000 tonnes within the next five years.
“To achieve the Government targets the UK will need to become the biggest recycler of plastic bottles, pots, tubs, trays and plastic film in the EU.
“The one area where the UK is currently top is that we have the highest proportion of our plastic waste, currently 70%, exported for recycling overseas. This is neither environmentally nor commercially sustainable.
“Having such a high proportion of our recycling activity dependent on overseas, and generally Far East recyclers, is a significant risk factor in meeting our targets and has been responsible for the export of UK jobs in recycling for a number of years.”
He went on to say the changes would create a “huge incentive” for fraudulent activity which had the potential to undermine all the positive work the industry has achieved over the last 15 years.
He called on regulators to stop thinking of plastic packaging as a problem and instead treat is as “part of the solution” to the environmental puzzle.

Image – Top, Andrew Green (left) of BPI gave Michael Fallon MP a warm welcome to the company’s Kent facility but that didn’t stop him questioning the feasibility of the UK government’s recycling targets.