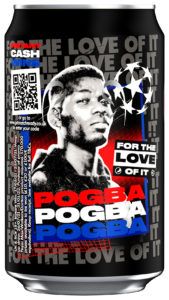 PEPSI Max is launching promotional packs featuring prominent footballers in celebration of its continued sponsorship of the UEFA Champions League.

The soft drink has sponsored the European competition for seven years and has recently extended to the women’s equivalent.

Barcelona’s Lionel Messi, Manchester United’s Paul Pogba and VfL Wolfsburg’s (women) Shanice van de Sanden will feature on the packs alongside QR codes – which, once scanned, will give customers the chance to win instant cash to the value of £10, £20 or £100.

Pepsi Max said, “Football is the number one sport in the UK, playing a massive role in British culture. The UEFA Champions League itself is the biggest football tournament in the world, with 2.4 billion people tuning into the UEFA Champions League 2019-2020 season. Therefore, at a time when football will be front of mind and when soft drinks sales are expected to spike during the summer period, the world-renowned players on-pack will be instantly recognisable to shoppers.”