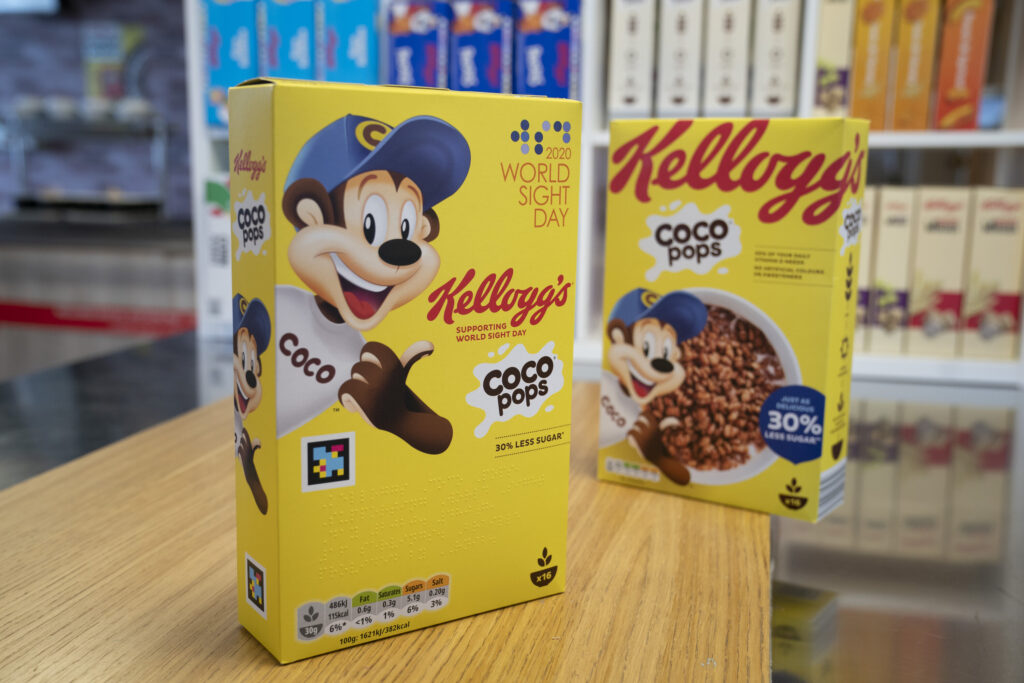 The new boxes feature braille and on-pack information is in a larger font size. As well as this, the new packs utilise a new technology that allows smartphones to detect a unique on-pack code which reads out labelling and allergen information to the user.

The boxes will be trialled in 60 Co-op stores across the UK, with Kellog’s saying that it hopes to adapt more of its cereal boxes to include the technology – should it prove successful. The move comes after research from RNIB revealed that nine in ten blind and partially sighted people feel that information of food packaging is difficult or impossible to read.

The NavilLens technology allows smartphones to pick up on-pack codes from up to three metres distance – so can be used both at home or in-store. The user can choose to have the ingredients, allergen and recycling information read aloud to them – as well as having it displayed on their device. The technology is currently being used across Barcelona, Madrid and Murcia city’s transport systems.

Chris Silcock, Kellogg’s managing director, commented, “Over two million people in the UK live with sight loss and are unable to simply read the information on our cereal boxes. That’s why we partnered with RNIB to trial special boxes of Coco Pops with NaviLens technology – a first for food packaging. If the trial is a success, we would hope that it could appear on more of our cereal boxes for visually impaired shoppers to access.”

Marc Powell, strategic accessibility lead at RNIB added, “Important information on packaging can often be in very small print, making it difficult for blind and partially sighted people to read. This can make shopping a real challenge, especially for those with specific dietary requirements – as they can’t see the all-important nutritional information.

“This trial with Kellogg’s using NaviLens technology has raised the bar in inclusive and accessible packaging design – allowing people with low or no vision to locate a product on the shelf and access all information about it completely independently for the very first time.”