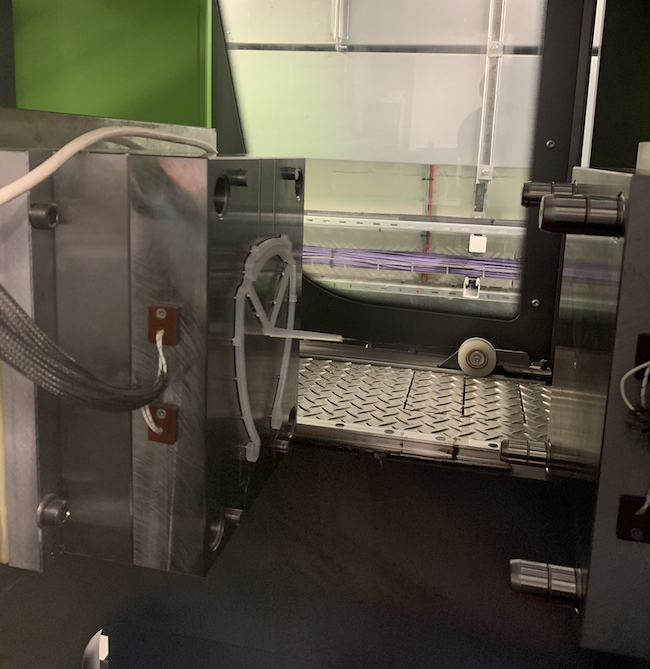 THE University of Glasgow has issued a plea for the donation of any spare 250 Micron Acetate sheets, to help with its production of up to 1,000 pieces of personal protective equipment (PPE) per day.

A team from the university’s James Watt school of engineering repurposed an injection moulding machine to produce safety visors. The university said that, over the last couple of weeks, they have created more than 3,000 visors and made them available free of charge to those in need, including shop assistants and care home workers.

However, it was soon realised that this printing process was ‘very slow’ compared to injection moulding. School technicians, Tom Dickson and Wilson Macdougall, worked ‘flat-out’ for three days to create a mould suitable for use in the university’s equipment, which manufactured small parts for biomedical research prior to the pandemic. Now the university can produce a headband in just 26 seconds, and say that they are able to manufacture 1,000 a day or more for as long as required.

Professor Gadegaard said, “A few weeks ago, when it was emerging that carers were likely to be affected by shortages of PPE, we were keen to do whatever we could to help.

“We’re really pleased that we’ve been able to use the expertise we have here at the James Watt School of Engineering to come up with a very promising safety visor which could make a difference for frontline staff.

“The School provided us with the funds to start investigating our options and buy the raw materials we need, which means we can offer the visors free of charge to carers. Having our own injection moulding tools allows us to produce at a scale each day which is equivalent to nearly 100 3D printers working around the clock.”

The PPE produced thus far has been shared with workers across the city, and the university said that they expect to produce thousands more in the coming weeks. However, they admitted that they’re also anticipating a need for assistance with materials from other organisations and members of the public in the near future.

Professor Gadegaard added, “We currently have enough raw material to keep producing the headbands themselves for several weeks, and expect to be receiving more from suppliers soon.

“However, the plastic acetate visors themselves are becoming more difficult to source, and that could be where we start to run into trouble. We’ve already issued a plea to colleagues for spare 250micron acetate sheets  and we’d be happy to hear from anyone who would be willing to donate any they might have in their stationery cupboards.”

“If we receive more than we can use, we will be happy to share with the many other local groups who are working hard to provide visors to those in need.”

Anyone who would like to help can get in touch with the team at the University of Glasgow by emailing: covid19-ppe@glasgow.ac.uk