By Marcel Arsand, Ball sustainability manager and chairman of The Can Makers. He is set to speak at the Designing a world leading recycling system in Scotland event in Edinburgh on 11 June.

SCOTLAND is a country of firsts. In 1926 inventor John Logie Baird from Dunbartonshire demonstrated the world’s first working television. Sir Alexander Fleming, the Nobel Prize-winning biologist who first discovered penicillin, was from East Ayrshire. In the late 19th century the world’s first practical telephone was patented by Edinburgh engineer Alexander Graham Bell. Gin and tonic meanwhile, that most quintessentially British of tipples, was the brainchild of Scottish surgeon George Cleghorn.

Alive with the spirit of innovation now Scotland is set to become the first part of the UK to introduce a deposit return scheme (DRS) for drinks containers. Last year Scottish Government Cabinet Secretary for the Environment Roseanna Cunningham unveiled Holyrood’s vision for the scheme. The DRS sees a deposit added when an in-scope drinks product is purchased which is refunded when the packaging is returned. The Scottish Government believes the scheme will drive up recycling and slash littering rates.

In May this year Cunningham unveiled her proposal for the design of the scheme. The proposals include a focus on an ‘all-in’ deposit scheme model, including PET plastic bottles, beverage cans and glass bottles – with a flat rate deposit of 20 pence, applied to containers of all sizes and prices. It also included a return to store model where all shops selling beverage packaging should be able to accept and pay the deposit.

In delivering the UK’s inaugural deposit system Holyrood faces significant challenges in creating a system worthy of replication in England, Wales and Northern Ireland. The Scottish Government deserves great credit for being bold enough to tackle the issue of waste and recycling head on. But there remain significant challenges associated with implementing a DRS that truly works for the people of Scotland.

If Scots are to get behind the scheme and play a full role in redeeming the deposits they pay, the DRS must have consumer-convenience hardwired into its design. Some 30% of Scottish adults do not hold a full driving licence and it’s clear for many carrying multiple drinks containers on public transport to a redemption point will prove logistically challenging. Similarly the return to store model provides little clarity thus far on how tens of thousands of people camping at music festivals will be able to redeem the deposits on the drinks they consume without queuing for hours.

Scotland’s DRS will be a success if it works for everyone, from those with access to private cars to those who travel via train and bus. It must represent a convenient solution for those that buy their grocery online as well as for those that buy in stores. It must fully utilise manual handling as well as cutting edge technology to ensure the DRS is a viable part of everyday life for all Scots from Arran in the west to Aberdeen in the east.

The Scottish Government rightly wants to increase recycling across Scotland and believes the DRS is the way to do it. Holyrood’s DRS must therefore encourage design for recyclability. It is not enough to be included in the scheme if the best end of life option for the recyclate is to be used as aggregate or to make a new park bench. Modulates fees need to be the driver that ensures packaging is designed with real circularity in mind, not just for those in-scope of a DRS but packaging in general. Coffee cups and cartons are currently not considered as part of the proposed DRS and there is a real danger these containers will not see the improvement in recycling rates witnessed for those containers included within the DRS.

To overcome this it’s vital producer fees reflect the true cost of materials to the environment and society within the extended producer responsibility regime. In Norway, the fee for aluminium cans is negative, whilst PET bottles pay a higher fee; if the bottles have additional features (coloured, sleeves, etc) the fee is even higher. If we are serious about a true circular economy and want to protect and enhance our environment for generations to come the polluter pays principle has to be taken into consideration.

Pursuing a high flat rate deposit rather than a variable one based on the size of the container could have unintended consequences like driving consumers to switch from small portion size packaging to larger bottles. A study conducted by Alupro in 2018 indicated that almost 25% of can consumers would switch from multipack cans to large PET bottles assuming a 10 pence flat rate fee.

A scheme with a variable deposit fee based on the size of the container, like those implemented in most Scandinavian countries is a better approach, ensuring consumers are not incentivised to purchase unduly large containers.

Now more than ever before Scotland is relying on Holyrood to deliver a DRS that works for communities across the country. For the sake of generations to come hardwired into the design of the DRS must be a commitment to true convenience and recyclability. 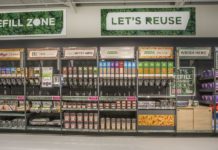