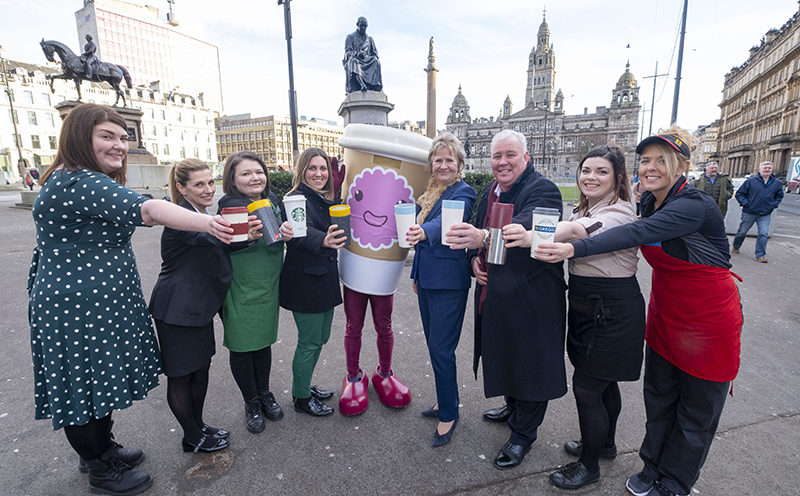 The Cup Movement has been developed by charity Keep Scotland Beautiful in response to “growing concern” about the environmental impact of single-use cups – with an estimated 95 million in the Greater Glasgow area being used each year.

The campaign – described as the largest sustained single-use cup collection and behaviour change initiative of its kind in Scotland – is being supported by the Paper Cup Recovery and Recycling Group (PCRRG).

The Cup Movement aims to work with retailers across the city, bringing together all stakeholders to engage the public to educate, inspire and empower people to change their littering, recycling and reuse behaviours; gather robust evidence to inform policy and create a model of best practice that can be replicated in other major cities; and contribute to Scottish Government circular economy ambitions.

If successful, the model may be rolled out to other cities across the UK.

Derek Robertson, CEO of Keep Scotland Beautiful said, “The Cup Movement in Glasgow is a truly collaborative initiative that has been 18 months in the planning. We look forward to working with PCRRG members Costa, Greggs, McDonalds UK, Pret A Manger and Starbucks UK and other funders including Excel Vending, Kidd’s and Graphic Packing International to deliver a transformational campaign right across the city.

“By bringing together businesses, institutions and people, we will be working hard to reach each and every cup before it becomes litter or landfill. Whether it be through recycling or switching to a reusable cup, we want people to realise they have an opportunity to be part of a positive movement for change.”

Neil Whittall, chairman of the PCRRG said, “We are delighted to see this intervention get off the ground and I am grateful to the members of the PCRRG for investing in this inspiring project. It is vital that industry plays its part in supporting behaviour change activities to help us get cups collected for recycling. So, projects like the Cup Movement in Glasgow are important for us to be involved in. It is also great to be working in partnership with such a credible organisation as Keep Scotland Beautiful who are experts in managing environmental campaigns.

“The Cup Movement has also attracted funding and support from Glasgow City Council and the Scottish Government.”

Scottish Government Cabinet Secretary for the Environment, Climate Change and Land Reform, Roseanna Cunningham MSP commented, “I am delighted to be supporting the Cup Movement in Glasgow. With up to 500 million single-use cups being used in Scotland every year, we all need to do our bit to make sure they don’t end up littering our streets and our seas.

“Tackling our reliance on throwaway cups and encouraging people to make the right choices are important steps in helping build a sustainable future for Scotland. That’s why we decided to remove single-use coffee cups from the Scottish Government’s main buildings last year. I’m sure the people of Glasgow will get behind the Cup Movement with equal passion.”