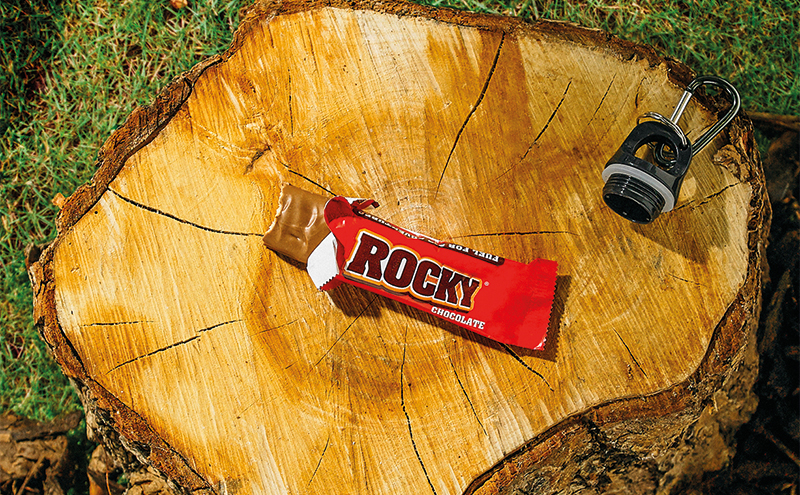 The manufacturer operates four lines running 24-hours-a-day at speeds of 600 bars per minute at its factory in Kirkham, Lancashire.

With some of the equipment nearing the end of its lifespan, Fox’s visited Interpack to research upgrade options. Ilapak’s DSA Eagle flow wrapper was on display at the show. The machine is described as having the ability to wrap biscuit bars at speeds in excess of 1000ppm.

The DSA Eagle boasts features including automatic splicing and expanded touchscreen diagnostics. Ilapak said heavy duty construction and the design of the feeding system are also key to the flow wrapper’s “exceptional performance” at high speeds.

“There is a lot of vibration when running at these kinds of speeds,” explained Chris Gee, sales manager HFFS at Ilapak.  “The Eagle is based on a very heavy duty mechanical platform and 12.5mm thick plate frame construction. This ensures stability and smooth operation of the jaws at very high speeds.”

The Eagle deploys sensor technology to perform a profile check of each biscuit just before it enters the flow wrapper.

“The system checks length, height and weight of each bar and any products that fall outside of the programmed parameters will be rejected before they enter the flow wrapper and cause jams or blockages,” Chris added.

When one of Fox’s old flow wrappers broke down, the firm contacted Ilapak to see if they could buy the DSA Eagle seen at Interpack. At the time, the exhibition model was being shipped back across the Atlantic. Arrangements were made to get in on a return flight as soon as it landed and, on arrival at Heathrow Airport, it was immediately transported to Kirkham for installation and in-situ trials.

“We were losing a significant amount of money due to the reduction in throughput, the decision was taken to complete trials on site, instead of America, due to time constraints,” said  Paul Nolan, chief engineer at Fox’s Kirkham site.

The flow wrapper was successfully interfaced with upstream and downstream equipment soperating on different and older control platforms. Ilapak said Fox’s is now looking at upgrading its other flow wrappers to DSA Eagle systems.