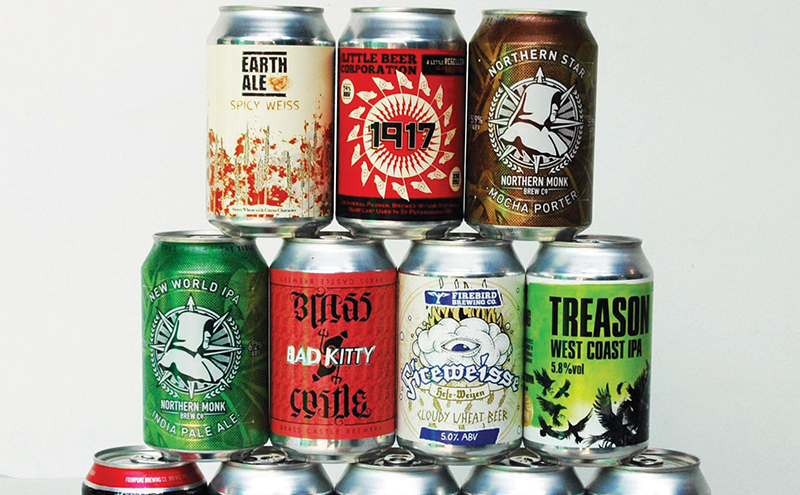 CANNED beer is an important, growing sector of our industry. The industry needs to keep innovating and slowly but surely brewers will break the stigma attached to canned beer; unfortunately many people still believe cans can result in a metallic taste from the beer coming into contact with the can material. Of course this simply isn’t the case – can production has come a long way over the years but many people remain unaware of the coating on the inside of cans that prevents contact between the drink and the metal itself.

The environmental impacts are very important too; cans are lighter to transport, require less material and are recyclable.

The benefits to lager in cans are the same as for any other beer-product; freshness being the key one for us. Our lagers use aromatic New World Hops so it’s important that the fresh flavour of these is locked in, safe away from oxygen and UV rays which have a corruptive affect on aroma and flavour.

As mentioned, the cans are lighter to transport, which is great for those travelling and for us during dispatch; they also cool down quicker in the fridge.

Earlier this year, we entered the Indie Beer Can Festival – a competition for brewers like us which offered the opportunity to win a short run of our beer in a canned format. We entered into the competition for a couple of reasons; the number one reason being that it was a format we intended to add to our range following the purchase of our canning machine. However, we were also experimenting with a new “gluten free” product (Brotherhood Lager) and were interested to see how it would fair against competitors of the same style that were not gluten free.

Again, there is often a stigma attached to gluten-free products; people think they are less flavoursome. By topping the lager category I believe we showed that a lack of gluten does not result in lack of taste.

In the months since the competition we have started canning our top two sellers: Joker IPA and Caesar Augustus, both of which are now available in 4-packs from Scottish Sainsbury’s stores. Stock will also hit Scottish Tesco stores any day now. The Caesar Augustus cans also won a tender with the Swedish Government owned Systembolaget liquor stores; we have an initial stocking order in the region of 162k units with further stocking orders lined up. It’s been a whirlwind few months and incredibly exciting for us!

Our next step is to follow-up the canning of Joker IPA and Caesar Augustus with our Indie Beer Can winning gluten free “Brotherhood Lager” and our ever-popular “Seven Giraffes”.

We have embraced the can and so have our customers; we expect more and more brewers to do the same in the next year.