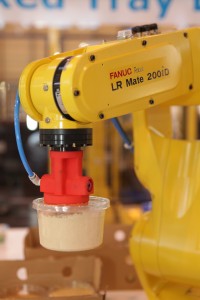 FANUC has collaborated with integrator Pacepacker to engineer a new robotic pot swap tray loading system, in response to a rising demand from retailers.

“Mixed trays or cases allow supermarkets to offer a broader choice of product sizes, flavours and variants and to keep their shelves replenished without having to hold a lot of stock. Equally, convenience and inner-city stores are finding that mixed cases or trays allow them to offer a far wider product range on restricted shelf space.”

Based on Pacepacker’s MTL technology, the unit’s freedom of movement will give potential users greater flexibility.

John continued, “If producers want to swap pots between three, four, or five different trays, a larger working envelope will be needed, and that is only viable with a robot. A robot is also more future-proof as it offers far greater programming flexibility and movement control than a cartesian arrangement.

“Say a producer wants to introduce a new pot design or has a range of tray or pot sizes, our LR Mate200iD robot will easily accommodate this.”

FANUC’s LR Mate200iD was selected due to the level of dexterity it offers and its diminutive dimensions. According to a spokesperson, “The six-axis articulated arm can tilt, twist and rotate single or multiple products with ease at speeds of up to 80 packs per minute. This dexterity combines with a reach of up 900mm to offer a ‘best in class’ work envelope and unrivalled breadth of application – the robot can even place products in deep trays or cases with lipped edges.”

“The ‘mini’ robot arm is human arm sized and the lightest mechanical unit in its class, weighing in at just 25kg. When supplied with FANUC’s DCS safety software, which is demonstrated combined with Rockwell’s laser scanner technology to produce a small-footprint solution offering very flexible configuration to suit what might be limited factory floor space, with the added benefit of portability if required.”

John commented, “The LR Mate200iD was designed as a versatile solution for manufacturing operations that require access into tight spaces. It is the smallest of all articulated arm robots, making it ideal for compact cells such as the mixed tray loader.”

“The robot moves at normal speed when no operator is in the monitored zones. If an operator approaches the “slow down zone”, area sensors detect the intrusion and the robot slows down. If the operator enters the robot motion area or “stop zone”, the robot comes to a complete standstill.”

FANUC expects the dairy category of the food industries to be one of the first to adopt the new system. However, there many other potential application areas such as ready meals, pasta sauces and jams.