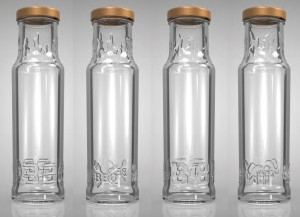 Four distinct versions of one bottle, each with its own embossed flame and BBQ logo, have been manufactured on the same production run. This means there will be multiple designs on the shelf so the consumer gets a surprise each time they buy their favourite sauce.

“I like the new concept of multiple embossing and this bottle is unique: four different bottles for the same purpose but with a slightly different character,” said Jan-Willem Ridt from Pont Europe. “When both a Swedish and a Dutch customer asked for something special for barbecue sauces we took the multiple embossing idea and developed it further with the help of Beatson Clark’s in-house design team.

“The bottle is new and unique and it will appeal to the high-end, premium sauce filler market.”

The multiple embossed bottle has already been chosen by Dutch food company Wijndragers, which makes mustards, sauces and dressings, for its Big Sam’s BBQ Sauce.

“Creative use of embossing like this can really give a product the edge,” said Lynn Sidebottom, sales and marketing director at Beatson Clark. “And as the product is based on one of Beatson Clark’s standard bottles, the mould costs and minimum volumes have been also reduced, resulting in truly unique glass packaging that is accessible by even the smaller brands.”