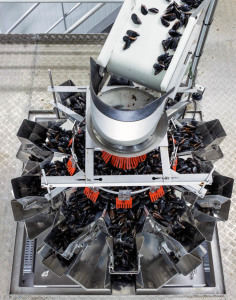 FRENCH shellfish supplier Scotto SARL has replaced a volumetric method of packing mussels into trays with an Ishida multihead weigher and weigher-to-pack distribution system, giving the company the opportunity to greatly increase its sales volume.

Founded in 1950, today Scotto sells a baseline 1500 tonnes of sea-grown mussels each year, 70% of which are packed in trays of 1.4 or 2kg under its own brand name. Mussels in trays, washed and ready to use, are becoming increasingly popular, with opportunities also available to significantly increase sales across a range of smaller shellfish including cockles and clams. Scotto was therefore determined to take advantage of emerging trends, using efficient modern automation to do so.

First the mussels are weighed and the percentage of meat each load contains is estimated. The shellfish are then scrubbed, de-bearded and washed in seawater.

For packing, the mussels are delivered to the top of the weigher from above via a descending conveyor. Scotto’s new weigher is a 10-head model of the Ishida RS-series. The downward conveyor and its junction with the weigher are designed to minimise wastage and prevent any of the shellfish escaping.

Flexible baffles at the entrance to each radial feeder help control the mussels so that they reach the large, embossed, stainless steel hoppers in an even manner.

A special distribution system under the machine then collects weighed amounts and delivers it via a dipping funnel into a tray, avoiding exposing the tray sealing lip to moisture or product.

Trays then pass through a traysealer before labelling, load assembly and dispatch. To ensure freshness, the entire process takes place within 48 hours. An external laboratory carries out bacteriological testing while Scotto itself makes regular tests of packed product quality.

Although the overall system is constrained by the current rate of tray sealing, the company can now process much more rapidly than before. Working at about 20 trays per minute, it now rates its potential mussel production at up to 5,000 tonnes per year.

The accuracy of the Ishida multihead weigher has reduced giveaway, increasing the yield of packed product, while the speed of the process is now more in line with the urgency of the shellfish supply business.

However, owner Henri Scotto is clear as to what he sees as the main benefit.

“It’s a good tool, quickly cleaned, which will enable me to diversify into the tray packing of 500g trays of small shellfish. But also to double or even triple my sales volume, especially to supermarkets.”