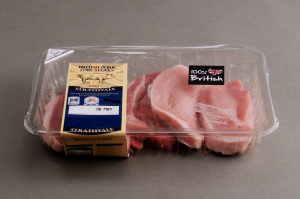 DURING her final year as an industrial design student at Brunel University, Solveiga Pakstaite developed a unique new label design that could now revolutionise the packaging industry and curb society’s excessive food wastage.

Bump Mark is a tactile gelatin label that mirrors the decay process of the food with which it is packaged. As the food deteriorates, the gelatin layer in the label breaks down and reveals a ridge of plastic bumps below. If you run your finger over the label and the gelatin solution is still smooth, the product is in date, but if you can feel the bumps underneath then the product has decayed and is now expired.

It was while working on a design research project on Guide Dogs for the Blind Association that Solveiga questioned how blind people could tell when their food was in date and began to design an alternative to standard printed expiration dates.

“I was so intrigued by this question that I knew I had to do my final design degree project about it. When I first started thinking about approaching this brief, I knew that the end product couldn’t just improve the way that visually-impaired people access expiry information about their food, but it also had to provide an added value for the remainder of the sighted population also. Sadly, business means that unless the majority benefits, it won’t be implemented.

“But then when I considered my original question, ‘How do blind people know when their food goes off?’, I realised that this is a question that is relevant for all of us – how do any of us know exactly when our food expires? We don’t really. And that’s why we’re wasting so much.”

Within months of completing her degree and the design, Solveiga won the prestigious James Dyson award for design and was named among a new generation of innovators in a list of London’s 1000 most influential people in 2014.

Now, with a patent pending and a preliminary contract signed to commercialise the label with Marks & Spencer, Bump Mark could make a dent in the seven million tonnes of food and drink wasted in the UK each year.

With more than half of the discarded waste still in date, food wastage costs average households in the UK £470 a year, rising to £700 for families with children, according to Love Food Hate Waste.

Bump Mark’s simplicity has broadened the label’s appeal. After a one-day trial with ASDA, with only a short demonstration and no prior marketing, 76% of customers responded positively and said they would prefer Bump Mark to current printed expiration dates.

Solveiga believes printed labels are not accurate enough and that food wastage could be significantly reduced with more precise information. Currently, the two main reasons for food wastage are cooking or preparing too much and not using the produce in time.

“The problem is that the way that the dates that are put on the packaging for you to use as a guideline is not accurate because the way that they are calculated is not regulated”, added Solveiga.

“On the most part, it’s just retailers avoiding unhappy customers by choosing a date way ahead of when that food will actually expire because they can’t guarantee the efficiency of our fridge at home.”

As Bump Mark can be applied at the exact time the food is packaged, the gelatin will break down alongside the food, paralleling its process of decay and providing customers with a binary answer as to whether or not to eat their food.

Describing herself as an ‘accidental entrepreneur’, Solveiga hopes Bump Mark will receive an international patent before going on to become a new global standard in expiration labels.

Food wastage does not only waste money but it wastes resources also.

Energy, water, packaging, time and labour are all used in the production, transportation and storage of food, and are ultimately futile if the final product is purchased yet never used. We need to better understand our food produce and its expiration process to stop unnecessary wastage and Solveiga’s Bump Mark may just be the first step towards achieving this.