Stretch hooding and shrink hooding are used to package palletised products of all kinds, from building materials to food and beverages. Gordian Strapping offers a comparison of the machinery and films used

BOTH stretch and shrink hoods can provide load stability and protection from dust ingression or infestation. If the product has already been secured with plastic straps, a thinner gauge film might be used simply for product branding.
Shrink hooding involves applying a heat shrinkable, gusseted polyethylene bag to a pack and then shrinking it to the pack using hot air emitted from gas burners (LPG or natural gas).
The flame on modern machines is only ignited during the shrinking operation. This ensures a considerable energy saving compared to earlier technology, where burners on some models were on during the whole production shift, regardless of whether the hooder was operating. Modern machines also use enclosed hot air burners. The burners on some older models are not enclosed, meaning that if the hood is poorly positioned the flame can come into contact with it, causing the pack to catch fire.
Stretch hooding involves applying a stretchable, gusseted polyethylene bag to a pack, but without using gas burners. While shrink film consists of a single layer, stretch film is a three-layer co-extruded film. With both systems, gusseted film is supplied on a reel. The machine then draws the film from the reel to the desired length, welds and then cuts it to form the hood. The hood is then lowered over the pack until the machine releases it at the desired position (often at conveyor level).
Advantages of Stretch Hooding
Stretch hooders do not use gas burners, a situation that brings with it the following benefits: 1) the machine can be situated anywhere in the factory without the need for a gas connection; 2) No gas cost; 3) A lower carbon footprint. Furthermore stretch hooding uses 25-30% less film per pack than shrink hooding to wrap the same product (based on the same gauge of film) due to the stretching process, which means less packaging waste.
When the two technologies are compared in this way, it is understandable that many companies are looking to replace their shrink hooders with stretch hooders. 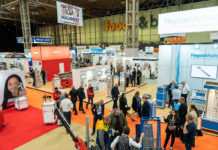