Greenpeace, the Rainforest Action Network (RAN) and WWF have claimed that the pulp and paper giant Asia Pacific Resources International Limited is dodging an independent enquiry into its deforestation practices in Indonesia by withdrawing from the Forest Stewardship Council (FSC). On June 22nd 2013, the FSC announced that APRIL had asked its certification bodies to withdraw all of its FSC Chain of Custody (COC) certificates.

PRSE to be held virtually in December 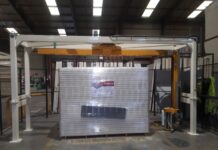 YPS has exceptional machine installations all wrapped up