Cost control is a constant concern for businesses operating in every sector but, it seems, the price of wrapping pallets is often overlooked. 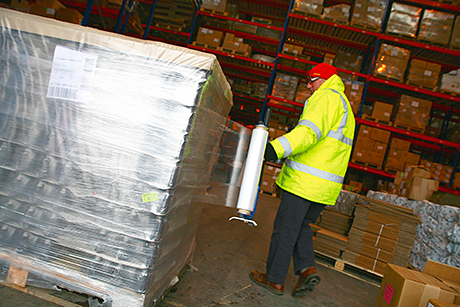 MANUFACTURERS or logistics companies that develop a reputation for delivering goods in anything less than perfect condition are unlikely to score highly in any customer satisfaction survey.
Indeed, manufacturing quality controls lose all value if products become damaged in the supply chain before they reach their final destination.
Ensuring that a palletised load is properly secured before it leaves the factory, warehouse or distribution centre is, therefore, an essential aspect of any efficient logistics operation.
Stretch wrap film is by far the most common method of stablising and securing a pallet load. Applying multiple layers of film – either by hand or with automated machines – around the packages on a pallet, not only secures the load but also protects it from exposure to dust, moisture and other contaminants.
It will also offer some degree of tamper resistance and should deter the opportunist thief from helping him or her self to items on the unit load.
But because stretch wrap is so commonly used, Martyn Sumner, operations director at Golden Valley Pallet Wrap Specialists Ltd (GVPS), is convinced many fail to monitor how efficiently they are using it. As a result, he says businesses could be overlooking an area of their supply chain operation where significant cost savings can be made.
“Warehouse managers can tell you precisely how much they are paying for, for example, their forklift truck fleet, but often have no idea what it is costing them to wrap a pallet,” says Sumner.
“Stretch wrap film should stretch by between 150 and 300% of its original length. So, a 1500m long role of stretch wrap film could provide around 6000m of film when applied to a load. If the user is, in fact, only getting 5000m from the role, then the cost per pallet wrapped goes up.”
He continues: “If, for example, it requires 50m of film to wrap an individual pallet – then the price difference between a role of film that stretches to only 5000m instead of 6000m in a busy warehouse that it is wrapping and shipping 500 pallets a day can be dramatic.”
There are a number of reasons why a user might struggle to achieve optimum usage from a role of pallet wrap film, explains Sumner. One of the most common at facilities where pallet wrap machinery is used is that the pallet wrapping machinery is under performing.
“In my experience companies place less emphasis on maintaining their stretch wrap machines than they do other equipment in the warehouse – like, say, forklift trucks or conveyors,” says Sumner.
“As a result of poor maintenance regimes, the gearing which controls the rollers can become slack and the film is not stretched to its maximum length.

The cost savings in the price per pallet wrapped will almost certainly make the return on investment calculation very straight forward.

“Also, it is common to see Perspex screens covering the control panels of stretch wrap machines. These have usually been added to stop operatives absent-mindedly interfering with the settings.
“But, as a result, the equipment’s performance parameters are rarely reprogrammed to suit the film that it is being applied and therefore optimum efficiency is not achieved.
“I would strongly urge any company that operates pallet wrap machinery to have the equipment serviced by an authorized service engineer at least once a year,” says Sumner.
“The cost savings in the price per pallet wrapped will almost certainly make the return on investment calculation very straightforward.”
To be sure you are getting the most from your pallet wrapping, Sumner recommends a simple test that users of stretch wrap can undertake to ensure that they are achieving the maximum from their film.
“With a felt pen, mark a line on the film. Then mark another line 100mm apart. Measure the distance between the two lines after the film has been stretched. Standard pallet wrap film should be capable of stretching by 150%, while power pre-stretch film and super power pre-stretch film will expand by between 250 and 300%. So, the distance between the two lines on a power stretch film should be around 350mm when it has been applied to a pallet.”

Of course, the quality of the film used also has a significant effect on performance. Modern stretch wrap film is becoming thinner and stronger. Until recently pallet wrap machine was 17-20 microns thick for hand applied film and around 23 microns thick for machine applied film. Now machine applied film is available in 12 micron thickness and it offers greater strength.
Sumner adds: “In some ways choosing pallet wrapping is a little like putting diesel in your car. Specifying premium film is similar to opting for higher grades of fuel – they are slightly more expensive but performance is enhanced. In the same way that higher grade fuel gives more miles per gallon, the newer films will wrap more pallets – which significantly reduces the cost per pallet wrapped.” 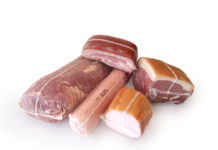 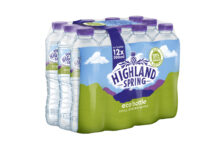 Highland Spring launches its most sustainable eco pack to date 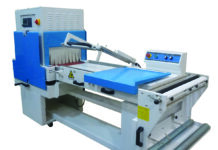